The sanctions against Turkey might backfire on Putin - the long farewell 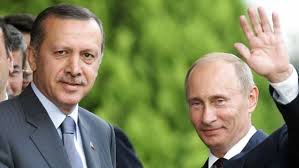 Much has been said about Putin's taking deeply and personally Erdogan's "stab in the back". Having followed his travails for almost 15 years now I can ascertain that this verbiage spells new forthcoming heights in hard talk, unleashing the full potential of his hybrid warfare machine. He will not stop until vindicated or out of power. As on many occasions before - he often acts without a advance calculus of costs and benefits of his own actions, which is typical for Russian Tsars.
Hurt pride but mostly fear of looking feeble are the key drivers behind his actions.
The Russian equivalent of the State of the Union address before the Federal Assembly contained a direct threat that he is intent at punishing Erdogan well beyond the effect of closing Russian market to Turkish tomatoes.
One thing is certain - in his pursuit of revenge at any cost reality ceases to matter - which is a perfect case of cognitive dissonance, referred to by Chancellor Merkel before.
Henceforth the danger of overreaction and excessive aggression ultimately causing disproportionate damage to his own country are natural consequences.
If there is one thing the West needs to be carefully watching and trying to influence - is Russia's peaceful power transition as violent scenarios and fragmentation of the country seem ever more likely. Kadyrov has pledges personal loyalty to Putin, but not to his successors. If the successor is not to his choice - there is little doubt that he will consider the new man at the Kremlin a personal threat and choose to depart.
In his personal spat with Erodgan Putin misses a key line - there is a limit to which he could ignore Russia's own vulnerabilities and holes in the armour shield. The buzz words are oil and Bosphorus.
Russia is critically dependent on the Bosphorus as more than 65% of its crude oil exports pass through the straits and even a greater percentage of that belongs to Russian oil companies.
Suffice to add the latest data from the Russians Customs office - which provides fresh evidence of the dubious effect of blind revenge - revenues from export taxes on oil exports in Russian state budget have dropped in the first ten month of 2015 more than 1,75 times (!?)  in spite of an increase in export in physical volumes by 7,6%. The corresponding figures for gas exports are - 26% drop in revenues against an 2% increase in sale volumes.
There is one more explanation, that fits well into the patchwork of seemingly hectic moves by the Kremlin on the international scene and recently in Syria - that Putin ordered his troops and planes in a desperate attempt to reverse the fall of crude oil prices and dwindling proceeds in the state coffers.
Regrettably for him Syria in not a factor on the global oil market and the Middle East are no more a irreplaceable ultimate supplier. But he might be right as a spin off in regional conflicts from the ISIS crisis in the who;e region and the rise of uncertainty could potentially amplify investors' fears beyond common sense and rational judgement.
In summary - Putin's escape into his virtual reality world might obscure his judgement inadvertently undermining his own power base in Russia.
Which means that we are in the final stages of the endspiel and close to a change of the power at the Kremlin.