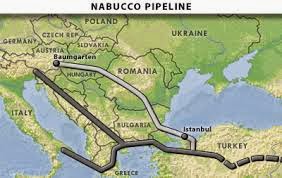 During President Aliev's visit to Sofia March 4-th the submerged project Nabucco seemed to resurface as the void it left proved unfilled.

After the announcement of the rerouting of the South Stream towards Turkey it seemed, that at last Gazprom and the Kremlin learned an important lesson in the turf war with the EC - namely that they are unable to circumvent the Third Energy package.

Henceforth Gazprom followed the logical conclusion and changed tactics trying to use the EU directives to its advantage instead of opposing them.

Rather than taking the risk of funding and implementing costly infrastructure projects on the territory of the EU, that it is unable to control and operate, the Kremlin has opted instead to deliver and sell gas at EU border in Turkey.

So far so good, but a tiny detail could derail the whole set up - Gazprom assumes that the EU will follow suit and buy gas at Gazprom designated delivery points instead of buying at the most logical place - the Russian-Ukrainian border without the need to invest in costly new infrastructure. This last scenario fits well into the recent strategy of the EU Energy Union to negotiate and coordinate gas purchase contracts with Gazprom on behalf of all its members.

For now let us leave this to the Russian gas strategists to ponder over for homework.

For the sake of the argument, let us assume that the Russian gas has already crossed the Black sea and enters the EU into Greece. It seems logical from Gazprom's point of view to try and make good use of existing transport infrastructure, including that of the beleaguered Trans-Adriatic Pipeline and the largely idling Turkish-Greek interconnector. In Kremlin's reading instead of being mistreated by potential third parties' intrusion into its own projects, Gazprom could play the third party itself and use other competitors' infrastructure.

The logic is rock solid - why should Gazprom try to seek exemptions from granting third party access to infrastructure that it funds and builds, while it can benefit playing third party. Thus the unthinkable becomes reality. Less the privilege of geopolitical card denying access to competitors to markets dominated by Gazprom's own infrastructure.

As confirmed by the European Commission the Russian gas monopoly has every right, until and unless it falls under Ukrainian related sanctions regime to use the TAP or any other infrastructure on the territory of the EU, including those enjoying derogation from the Third Energy package notably for the idling or unused capacity. Thus the Russian company's decision to reroute the South Stream implied a more ominous connotation for Baku - as it could de facto undermine Socar's plans to sell its gas to the lucrative Italian market. Thus in theory Azeri gas could be marginalized by significantly larger volumes of competitive Russian gas should the Kremlin decide to subsidize gas export price for the sake of undermining competition both in Turkey and Greece.

Socar still holds the majority stake and has committed to the financing of the lion share of the costs of the $5 billion South Caucasian Pipeline and the $11 billion TANAP pipeline. The control over their extension on Greek territory - the TAP is becoming more elusive, while the costs are rising. Not only will Gazprom be able to accede the TAP but Socar's DESFA acquisition seems blocked for now at EU level.

The Tsipras government does not hide its sympathies and multi-level dependencies on the Kremlin, that does not bid well for Baku's ambitions to reach EU market with its gas via Greece.

Amidst this amalgamation of circumstances and events the resurfacing of the Nabucco seems a logical and strategically well motivated move. Its greatest weakness - higher cost - can be addressed and mitigated using interim cheaper steps which assert their own viability at the different increased levels of produced, transited and traded gas.

а/ a mini-Nabucco phase - this is the least cost intensive part - which integrates all existing spare capacities of interconnectors, national and transit grids, including storage facilities along the Nabucco route countries - Turkey, Bulgaria, Romania, Hungary, Austria, Serbia and further on Central Europe.

c/ last phase is the building of a dedicated transit pipeline - the original Nabucco West once traded and transited volumes exceed capacities of existing infrastructure to warrant and justify higher expenditure. Not sure when this moment could arrive, certainly not in the next next 5-7 years.

What matters most is that along the Nabucco route lies a potentially unmet demand for gas from non-Russian sources between 15-20 billion cubic meters, which could be accommodated within the current transport infrastructure once fully integrated with minor upgrades. No such demand could be easily identified along the TAP route as the Italian market is oversupplied and the Western Balkans are just emerging market with limited demand requiring substantial additional investments.

That is how we returned to square one in the end spiel - prior to the decision of the Shah Deniz -2 consortium to sideline the "expensive" Nabucco West.

As often repeated in the past - it is not the politicians, but the consumers that ultimately decide where natural gas will flow.