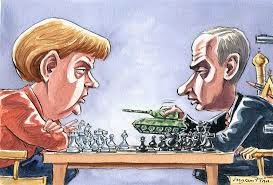 In recent months the debate whether it's worth arming Ukraine with lethal weapons has escalated to unseen heights without necessarily getting closer to the fundamental question - if yes/no why?

The Minsk-2 agreement opened a new front between those in the West preaching for real politik with Putin - getting over with the Crimea and East Ukrainian disagreements. This school of thought has been exemplified by an array of EU politicians defying criticism and flying into Moscow to try and strike a separate deal in return for economic favours. Orban and Renzi have their own reasons to defy common EU stance - after all it was Merkel and Hollande who negotiated with Putin the Minsk-2 agreement, not Jean-Claude Juncker. Crossing these red lines and ignoring the US - the French and German leaders dealt a mortal blow to the notion that the EU could speak with one voice. After Minsk the race to talk "in private" with Putin was on and the Russian leader spared no effort in keeping the heat up. Juncker's outburst - that the EU needs its own army is a sign of exasperation and a recognition that Europe is unable to stand up in a asymmetric standoff to Russia in the absence of own military capabilities. The diagnos​is was ​correct, the presc​r​iption was wrong - as Juncker​'s idea was interpreted as a tacit attempt to disavow NATO. It is neither practical nor credible that anytime soon will the EU reach a consensus on having its own army - the only real hope and pivot of EU security, including when containing the Russian threat will remain NATO.

The dove talk coming from Western leaders belongs to the classic appeasement school - the casino owners' hope that sooner or later the gambler will sate his appetite and leave. When and where that happens is often left to the whims of fate. The underlying argument is that the West is neither prepared nor willing to risk a major confrontation with a dedicated and ready to fight Russian hybrid warfare machine on the territory of an ex-Soviet republic. This is one more proof of the classic mistake - i.e. that European security can be fragmented along national borders - a conflict in Ukraine could be confined to its borders. The essence of such poor reckoning boils down to the cynic appeal - let's do business with Russia and leave Ukraine fall apart.

Some of the strategists in the pacifiers' camp preach, with some credence, that it is not worth mirroring Putin's strategy and confront him militarily in regions where he can project his power. Instead they focus on the West's levers that cause maximum damage to him​. It is not that economic and financial sanctions are ineffective and will not ultimately inflict unbearable costs upon Russia. The real issue here is that the West faces growing uncertainty keeping its integrity and resolve to adopt and attune deeper sanctions in response to Russia's more aggressive actions.

The leader of the Russian opposition was killed and the reactions in the West are muted at best. And the Nemtzov investigation saga is just beginning.

Whereas it is true that ultimately Russia will not be able to withstand economic and financial isolation as the temperature of internal discontent is rapidly rising it is also true that President Putin can enjoy an unprecedented by Western standards willingness of the Russian people to swap welfare for pride. It also true that Russia has few if any other but the military options to impress the West and secure its strategic security perimeter with buffer zones along its borders. Those who count on the internal Russian dynamics to take their toll and enforce change take it for granted that the Kremlin has run out of options. President Putin enjoys unprecedented levels of support and has under his control a wide range of formal and informal levers - including paramilitary or hybrid warriors and Kadyrov's secret services - ready, able and willing to engage and kill.

The number of victims of the Kiev's Maidan is no where near to the levels of potential casualties in an euroMaidan in Russia. The end game might not produce a pro-Western ruler at the Kremlin either.

Those in the EU and the US who believe that they could come to terms with Putin and control the process from slipping into the worst case scenario - an all out war - are naive at best. To claim that withholding arms deliveries to Kiev, thereby denying the Ukrainians the right to self-defense, will lead to peace - borders on self disillusionment. It is a just a matter of time before Putin's war machine starts marching on again westward. Without a strong military deterrent - a reinforced and strengthened Ukraine army - as a buffer - Russia's hybrid soldiers and the sympathizers in West will keep on eroding the European Union both from within and from afar.

The real choice the West faces is whether to arm Ukraine on a relatively modest and controlled scale now and or meet Putin's challenge later at a greater cost further west in Ukraine or in Europe.

The fact of the matter is that enduring peace under sanctions would inevitably expose the weaknesses of Putin's regime in Russia and eventually lead to his ousting. That is why he can't let peace last for long henceforth military action is his only chance to remain in power and alive.

One thing has remained unchanged since he came to power - his internal motivation often generates virtual reality and resolve that are beyond the reach of any common sense or reasonable argument - even coming from his closest circle. The only respect he has is for sheer power. Staying at the Kremlin seems his only chance to guarantee his political and physical survival and he will be ruthless in pursuing this end.

The West is not offering security guarantees to Ukraine nor membership in the EU. However refusing arm supplies to Kiev does not seem to be a sensible policy line at least one that could lead to enduring peace.

The EU and NATO have to choose where and when to confront Putin - either in Ukraine or further west or south in Europe.