After Kerry's visit - business as usual with Russia? Unlikely - part 2 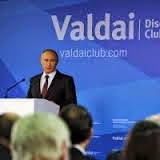 Kremlin's maneuvers are exceptionally complex and multi-level ones, as the ultimate stake is who is in charge at the Kremlin, which neither Vladimir Putin nor his entourage can afford to lose. Eltzin’s exit from power was peaceful and safe – the matter is still open for the current President and some scenarios seem sinister. This explains the obcession with keeping ordinary Russians under the anesthesia of Motherland- in-danger propaganda fix - surrounded by enemies willing to bite off parts of Russia – be it the Kaliningrad region, Caucasus, Siberia etc.

Most of this is not time specific but it has been resurrected to active use for the first time since the WWII on such a scale. This line of reasoning logically ends up in the must of defining natural areas of vital interest that spread beyond Russia's border into broadly defined buffer states - an abridged version of the zones of influence of the Soviet Union. Once the Holy Motherland is defined in such broad geopolitical terms, then its defense becomes an inalienable right, justifying interference and full use of the total asset base of Russian foreign policy  in Europe - from illustrious nationalists and eurosceptics, media moguls, intellectuals and business elite to moderates in the mainstream of left, left of center and right politicianss.

A poignant example in this category was the visit by former President Carter as member of the Group of Elders to President Putin, during which he made a media hot ‘revelation’ that the annexation of Crimea was 'inevitable' and in its essence it did not constitute an unlawful act of grabbing neighboring state territory but a return to the Motherland Russia.

The cherry Jummy Carter added to the pie he served President Putin – was his statement that there are no Russian troops in Eastern Ukraine.

Minister Lavrov wasted no time in bringing to the attention of the international community the silence of Secretary Kerry over the topic of Crimea.

Make no mistake - the words of the former US President or the muted reaction over Crimea of Secretary Kerry would hardly sway many Americans back home, but in the minds of his Russian hosts they will hold water in the main battle ground – Europe - where the information warfare is in full swing. And more importantly - Carter's words and the absence of Crimea in Kerry's talking points would evidence the split in the West reactions towards Russia - inviting even deeper cracks in the US-European relationship.

Following Secretary Kerry’s visit to Sochi, Kremlin hopes to see a race between EU leaders to be the first to take credit for restoring relations and "business as usual' with Russia.

The main objective of Kremlin's campaign so far has been to separate the "good" Europeans, who have been forced by the 'bad' Americans to forego the virtues of proximity to Moscow and disconnect the strong transatlantic military and political resource pool from the defense capabilities of a military 'lonely' EU. Prominent Russian political analysts have been talking about the concurrent effect of the ongoing unprecented persuasion campaign targeting Russian public opinion - that a war with the West is a possible and even potentially logical chain event should the process spin out of control.

Kremlin’s main geopolitical motive is to force the West to agree to a new Yalta Agreement and forge a strong bond between Russia's anti-Americans and anti-European forces and the pro-Russian political and public circles in the EU by stirring a nationalistic wave across the Union.

It's little secret that at present the traditional pro-Western circles in and around the Kremlin find it extremely difficult to identify a middle ground for restoring relations between Russia and the West. Their intellectual pursuits seem ever more elusive with the widening gap between the limits of compromise of Russia and the West.

An attempt to propose a hypothetical middle ground was initiated by the elder statesman of Russia - the Russian ex-PM and Foreign policy heavyweight Evgeni Primakov. The gist of his proposal was: Russia keeps Crimea and leaves Eastern Ukraine within Ukraine – i.e. formally complies with the Minsk agreements - in exchange for the lifting of sanctions. Furthermore Russia retains the right to intervene and define who is in charge in the regions with Russian speakers.

Primakov's idea doesn't account for the arc of "frozen" conflicts around Russia and the lack of any warranties that Moscow will discontinue its "creeping annexation" in self-defined "zones of vital interests." Evidence is not lacking - the bilateral Anschluss type treaties with South Ossetia, Abkhazia and Transnistria.

Primakov's proposal around which Western intellectuals and political analysts try to conceive an exit from the crisis is a priori an unacceptable basis as it ignores the fact of border change and the annexation of Crimea. Moscow has reached the conclusion that there is a need to push hard and exploit the vulnerablilities in the EU/NATO along the whole frontline. Russia tries to trigger a process of disintegration of the Euro-Atlantic space and propose and new order where her place is duly recognised. Crimea it is just a prelude to what Moscow sees as a long-term strategic balance redressing.

The instrumentarium used by the Russian Foreigh Policy Establishment to that goal is versatile. Given the limitations imposed by the sanctions on formal lines of communciation, a greater role is entrusted to  corporate and above all to non-governmental communication channels.

The work of the Valdai Club stands out with recent events gained most prominence. I have come to know some of the people involved in running it - intelligent and respected Russian political scientists, researchers and analysts who are currently experiencing a notable existential stress, as the hardline policies and deeply entrenched beliefs of the Kremlin leave little room for their intellectual mediation. Instead of chartering new courses for positive interplay between Moscow and the West their role has been confined to moutpieces of an established line in Kremlin’s foreign policy.

These Russian intellectuals are hardly satisfied with the current status quo as the demand for their analyses and ideas at home is minimal. Similar discomfort experience the traditional Russia-friendly circles in Europe, including the group of "friends of Putin" among EU leaders. They are torn apart between the political expediencies of maintaining a solidarity line within the EU and NATO and their attempts to strike a privileged deal with Moscow. The Kremlin rates their net worth value at par with their ability to impose "veto" on the continuation of sanctions against Russia in June. The rewards are individual sweeteners – projects, business and cheap gas. However even Gazprom's special gas price offers nothing special for spot trading platforms, and arbitration procedures seems to achieve more.

The success of divide and rule strategy of Kremlin is also conditional upon the semblance of business as usual with Washington. Even European friends of Putin when asked to choose between Washington and Brussels on one side and Moscow on the other - make no secret of their preference.

In the theory of international relations Vladimir Putin’s strategic line of conduct is best described by the Doctrine of Brinkmanship - the art of balancing on the brink of war. It uses a mix of tangible and virtual resources, keeping opponents guessing your intentions. Within such a wide range of policy variables opponents are expected to make more difficult and less optimal choices. The ultimate objective is to make up with virtual added value for the shortfall of tangible assets in Kremlin's power balance sheets.

Balancing conflicts on the brink of their hot phase is nothing new as a strategic nostrum, nor Russia is the first country to apply it. But Putin was the first in recent history to use virtual value in foreign policy - derivatives based on hybrid warfare power, exploiting vulnerabilties and threat perceptions. Keeping a deliberate and consciously unpredictable line in foreign policy does not imply he actis irrationally. On the contrary, he believes Russia does not have option but to build and use virtual segments in its asset base as the economy and its financial and technological base is inadequat to support the global ambitions of Vladimir Putin.

As with financial derivatives, foreign policy derivatives tend to respond to cycles of boom and bust. Foreign policy ‘’markets’’ ultimately have to reconcile real with virtual value fundamentals. Russia's self-imposed isolationism, depleted financial reserves and weakened economic base are geopolitical liabilitues. As virtuosic as the Russian President’s proficiency in adding virtual to real value might be – Russia’s global status remains locked and limited within the limited economic confines of Kremlin’s global outreach. Moscow's capacity to project global power is as good as its economy.

The West is coming to the natural conclusion that it makes greater sense instead of responding to Moscow’s tactical overtures to play its own game. Europe has nothing to gain in engaging trailing the peaks and dips of Putin's brinkmanship.

Moscow understands that nuclear weapons rattling has limited recourse. Nuclear arsenals are good as a deterrent but pretty useless as a tactical tool. However great is the ability of Russian citizens to withstand pain and make sacrifices in the name of the Leader, it is not limitless.

The Russian president could fund new weapon development programs enough to stage a propaganda coup and impress the public on any given parade – but it is completely different job to build and sustain a competitive defense industry capable of tugging upward the industry and the economy in general.

The critical and widening gaps in the organziational, financial and technology base have been exemplified by recent dramatic failures in the Space Program.