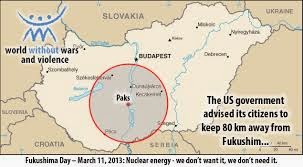 The Hungarian Government of PM Orban believes it can build the NPP Paks' new reactors on its own claiming sovereignty rights in the nuclear field. This is a deceitful notion, that has already invited billions of euros in sunken costs in the Bulgarian Belene NPP equivalent. Those that doubt could read my work on the Belene NPP's fate.

Geoeconomics these days matter more than ever and Hungary will soon learn this the hard way. The advantage of Budapest is that it is not spending its own money. Bulgaria and Hungary are neither China nor India - i.e. self sufficient in scale - to engage on their own in the highest risk energy projects mankind knows. None of these projects have passed before their start rigorous risks stress tests, definitely not geoeconomic, technological and market ones.

The systemic nature of the conflict over Ukraine between Russia and the West precludes any immediate or near term resolution. Imagine the fate of the Paks project should an escalation erupt and Russian nuclear technology is added to the sanctions' list? One may argue as to the probability chance of such a move - but even if low it is still too high to accommodate within a multi-billion dollar venture.

Nuclear power project risks are simply too versatile in nature, dynamic in character and difficult to manage within the national frame of a small and mid size EU country. Most developed economies in North America, the EU and Asia are extremely cautious before jumping into new nuclear adventures considering the market context of alternative energy technological breakthroughs and energy efficiency gains. Deindustrialization has taken its toll and the lack of large industrial consumers has largely removed the need for huge overcentralized generation capacities.

The energy markets are too volatile to predict, moving away from predictable long term PPAs into short term spot market dominated trade. Hence hedging future cash flows risks beyond the mid term is an ever daunting task in an era of austerity. Endless 'open' issues and moving costs' list (safety topping the list) emerge that are extremely challenging amidst current macro and microeconomic realities in the EU.

Hungary's and Bulgaria's nuclear project challenges are not miles apart. Hiding it all behind state secrecy facade is an admission of diffidence. Nuclear energy projects need more than other energy projects transparency and open communication lines - at every stage of project execution. Those in doubt should check the Equatorial principles - that guide project financing of large scale infrastructure in the Western world.

For now Rosatom has an edge over its competitors largely thanks to the state aid and subsidies enabling it offer full package of technology, EPC and funding that even poorer nations can deem acceptable. The promised bank of affordable electricity prices and fixed development costs in nuclear power projects is beyond most clients' reach. The tipping point in such projects is the collateral in case the revenues are below projections.Where things might get nasty.

Hungarian and Bulgarian industrial consumers have far too many cheaper and accessible alternatives for long term electricity supply than 'big bang' large scale high cost ventures in the nuclear field.