Why Russian diplomacy is unable to secure the Turk Stream? 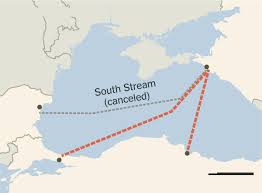 The short answer is that this is mission impossible.
Following the boycott of May 9-th and the lack of diplomatic success in securing support from host governments along the route of South Stream - the Russian foreign ministry stills sticks to ignoring prior clearance with Brussels. It seems more likely that grim faces at the top have voiced their discontent with the performance of Smolenskaya Square. The interpretation coming from the MFA is straightforward - the South/Turk Stream countries are failing to act solely because "the Americans are squeezing the Europeans' arms". The more logical observation that all respective governments act out of precaution, prudence and common sense is not considered at par. The lessons Bulgaria learnt are spreading around the region.There is little hope of bridging the gap of expectations with one the one hand Gazprom claiming the EU should build connedting infrastructure to the Turkish border and the European Commission failing to recognise this as a priority or even necessity, on the other.

The Russian diplomacy is doing its utmost to deliver under the circumstances and the perception of its ultimate success should be judged against the objective reading of the attainable and possible within its missions. Russian diplomats do not have a say when it comes to ordering pipes or contracting Saipem to lay the pipes without legal closure. This is the parallel reality Chancellor Merkel was referring to - the realm of wishful thinking and virtual interplays.

Now the Kremlin is trying to avoid loss of face seeking graceful escape from having to publicly acknowledge that none of the Streams will be possible unless and until the winds of detente in relations between the EU and Russia come into play. Gazprom has already lost more than hundred million dollars in differnet fees for the pipe storage, purchase and contracting pipe laying ships and other mobilzation works. And the Russian government seems adamant about talking to Brussels and coming to terms. Which takes Turk Stream exactly to square one -  where South Stream ended.

General elections are coming up in Turkey and there is little doubt who will govern. But there are speculation as to the format of the new government and its priorities when it comes to the long expected intergovernmental agreement. Even if the sea section is relative easy to kick off, the land segment of the Turk Stream seems impossible within the declared time frame given arduous procedures. It seems at the moment that Gazprom is willing to make the ultimate bluff and start laying the pipes in Russian territorial waters at is own risk just to show that it is in charge.

In the meantime Gazprom is not shutting the door on South Stream either - but moreso to create competitive pressure on the Turkish Government than to reopen the saga with the access to a EU country's territorial waters.

Evidently Gazprom is trying to stop the financial bleeding or attribute some logic to the rising bill in the current stalemate by pushing forward the segment in Russian territorial waters.

Whilst this step is a sheer gamble the fait accomplis of the pipe reaching the Turkish coastline will put additional pressure on the Turkish authorities to make use of an existing pipe - no cost, no risk, sweetened by possible additional discounts in gas prices delivered via this route.

However Gazprom is on its own after the South Stream shareholders left. It has to take the whole debt and reach highly vulnerable state in relations with the Turkish government with regard to gas take up and prices as only those destined to the Turkish market are a safe bet and forecast for rapid and continuous growth have been recently revised and reduced.

Worth recalling the final days of the Blue Stream project and the fate of its planned extension. Delays of few months exposed Gazprom to in penalties and forced fresh discounts on gas prices for Botas. The project was able to barely brake even only by virtue of a USD 1,6 billion state subsidy.

Economic sense, though is not the leading priority in the geopolitical projects of Gazprom.

Under the above circumstances regardless of the efforts and the skills of Russian diplomats they can hardly make up for the lack of objective appraisal of the possible and the attainable in the energy plans of Gazprom and the Kremlin.
Публикувано от Ilian Vassilev в 13:51 ч.