President Putin seems running out of options with the news that oil prices are diving, the ruble depreciating and the economy sinking in deep and seemingly irreversible decline. Gazprom is on the ropes, all the 'streams' on hold and most of his worst fears are coming true - Europe is seeking less and less energy from Russia. To add insult to injury - China looks confident and comfortable with its non-Russian energy supplies. Even Putin's closest allies in the CIS are pursuing their own and independent agendas.
Yet in spite of all the doom and gloom in the newswire these days Moscow still commands a near insatiable pool of negative power that blends well with fresh diplomatic initiatives - the new call for joint action against the Islamic State. This hybrid policy mix seems to be the main avenue of Kremlin policies - stirring trouble in the neighborhood and creating hurdles to competing projects in energy infrastructure that undermine Russia's pretense to dominate the energy field in Europe.
Hence Moscow's pursuit to be seen as capable of retaliating and holding its line at every curve of the political dynamics.
President Poroshenko, whose words should normally be calibrated to accommodate hybrid warfare gravity, was insistent that Russian will attack a Black sea littoral state.
Why Georgia fits best his warning? 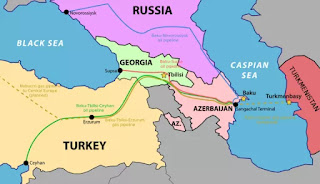 In spite of getting rid of Saakashvili to appease Moscow - Tbilisi's elite has sustained and looked to promote its role as transit country for key West destined energy projects - the so called South Energy Corridor.
Russia's key response - the Streams - never seemed to enter the port of implementation. Even Kazakhstan left the station of loyalty signing the sea border delimitation agreement with Turkmenistan, that effectively cleared the field for the access of Turkmeni gas to Europe via the Trans-Caspian pipeline. If Russia looks unable to stop competing gas flows at source base countries, in Turkey (Turk Stream) or in Bulgaria (South Stream), the only option left seems to be to counter the West's moves in Georgia. A sense of what might happen to Georgians is the aggressive move of Russian military out of South Ossetia into Georgian proper territory - determined to seize control over 1 mile section the Baku - Supsa oil pipeline. The message was clear and loud.
Another key gas pipeline exploded in Turkey - the Baku-Erzerum, which compounded the effect. The usual suspect was the PKK yet most would agree that there is a geopolitical underpinning to the event as transit infrastructure from Iran. Iraq and Georgia are favored terrorist targets, that indirectly benefits opponents of transit projects to Europe.
Whereas the West's strategy does not focus on Iranian or Iraqi Kurdistan gas - energy flowing through Georgia is key to its plans to contain Russia geostrategic moves on the energy plane.
Ukraine is part of the main European region conflict theater and NATO seems capable and determined to fight back further advances of Russian hybrid troops.
Georgia remain isolated, internally politically divided and very much on its own.
As on previous occasions the subtle part of Russia's new opening on Georgia might start might include almost innocent threats to ban Georgian wine or Borjomi water for failing to meet Onishenko's obscure health standards. But it will not be long before the hybrid troops move in and Moscow challenges the West engaging its full attention by threatening to block key old and new gas projects transit passing through Georgia.
The stakes are high and Kremlin will hardly hesitate to use its negative power to deny the West the chances to move energy supplies through the Southern Corridor.
Not until a new Yalta agreements is negotiated accommodating Mr. Putin's interests.
Публикувано от Ilian Vassilev в 15:10 ч.