The Geopolitical fall out of a Grexit - fearing Russia 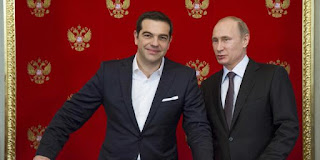 The fear that Greece might fall into the hands of Moscow is probably the strongest and most credible trump card the Greek government holds in its negotiations with the Troika, while trying to strike the best possible deal and secure fresh credit lifelines.

Speculations with the potential geopolitical vacuum, that might emerge after a Grexit ending up in Weimar type of humiliation for the Greek elite, generate real perceptions and fears that matter at the talks. Tsipras has earned some vocal and hardline opposition within the majority of the members of the Eurozone. However, geopolitics might easily override financial and fiscal considerations, with Washington adding its heavy weight in favor of a political deal.

It is not by accident that Mario Draghi, the Head of the European Central Bank, while casting doubt on the chances to save Athens within the EZ, struck a unusually geopolitical line for a banker ; "We will not leave Greece to Moscow".

How serious a geopolitical threat is the notion that Russia might overtake the West as Greece's strategic partner along the cooperation modus attained with Cyprus is difficult to judge. The expert community and the government in Moscow share the belief of the ECB and the key EU institution that Russia can't substitute the Union as a financial donor of Greece. Worth recalling however are the events around the last minute approval of the strategic credit line extended to Yanukovitch by Putin and Medvedev, that overrode the common sense "nyet' votes of most if not all the key ministers in the Russian government.

We all know who takes the strategic decisions in Moscow - and there is little doubt that if the man at the helm takes the decision - technical and professional wisdom would not matter.

It is highly unlikely however that Russia will extend tens of billions of euro in financial aid or credit lines matching the terms and volumes offered by Bruxelles. The Russian president, however, might tempt the Greek elite with a proposal to blend a grant element with a lifeline up to 4 billion euro - just enough to meet payments of salaries and pensions at the peak of suspense emerging as the Savior and the True Friend.

Look out for a catch - the Kremlin will seek guarantees and try backdoor deals with strategic assets of the Greek state. The Syriza government is already talking of potential trade off along similar lines and Tsipras and his cohort have a vested interest as traditional "political'' deals generate sufficient sidetrack proceeds to "oil" future election and political campaigns.

The cases where political overtones blend in government transactions are not unique in old Europe, with collateral benefits ending up in party and personal coffers. Berlusconi and Schroder have many followers and disciples.

Tsipras and his team would hardly make any history if they strike a "cash for influence" deal in a vintage proof of the ongoing hybrid war.

Whatever the EU and the international creditors offer - the current Greek government leaders are unlikely to sever or second rate relations with Moscow - leaving the door open and the perceptions alive that they are ready to make good on the Russian threat at any moment in time. So far the bluff seems to work - at least in some top Western government quarters.

Both in Washington and in many European capitals the nightmare of Greece offering military bases to Russia is very much alive. And this is not the only or the worst scenario.

The denouement is near but the Russia geopolitical threat will hover over the talks and the possible Grexit.