The beginning of the end for Putin 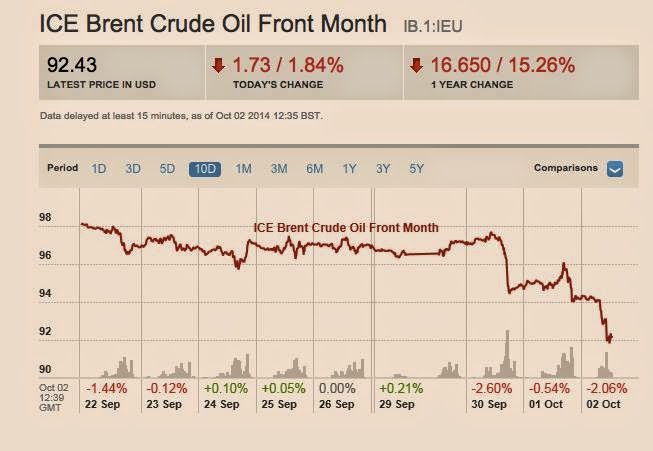 The chart could be easily dismissed by the pro-Kremlin analysts as short term event not indicative of a more sustainable long term trend. Yet these days you will find few if any serious top manager in Russia's oil industry able to conceal his concern for the days ahead. More people in Moscow whom I have met through the years are considering a temporary or more permanent exit from the country - to spare their families the stormy days ahead. Putin's ratings are no consolation and many people have a lot to loose.

Oil revenues are far more important for Putin's rule that gas proceeds - by a margin of 4 to 1 and the what the chart implies send shivers down the spine of Russia's elite. While Russian gas policies overwhelm international public agenda on recent events in Ukraine, they are tediously banal when it comes to Gazprom's transit infrastructure limitations. For whatever Gazprom might seem to bring to Russian foreign policy it has failed to add to its global economic clout. Gazprpom's attempts to penetrate the US market have failed miserably, while the trumpeted up gas 'deals of the century' with China - the Power of Siberia pipeline and the new gas fields in East Siberia developments - bring fewer and fewer smiles in Moscow with the sobering up on the cashflow realities. The Russian oil companies and recently Rosatom have been the economic backbone behind Kremlin's recent plans to regain the Soviet Union's global status. Hence the importance of the shifts in the oil market and the above chart.

Putin has bravely attempted to allay growing fears on pending capital, currency and travel controls and ushered in earnest the usual red carpet welcome message to foreign investors at a recent PR event in Moscow. However the magic in his words has gone. The ruble continues to depreciate and the Urals grade oil prices continue to fall.

What his officers do at the Donetzk airport fighting regular Ukrainian army carries greater weight for the markets than a crowd charming offensive at a regular investment forum in Moscow.

No one believes that inflation in Russia will remain within the range of 7.5-8% or capital flight will stay under the record breaking levels of 100 billion dollars in 2014. The Russian Central Bank might prove useful propaganda tool in providing lower estimates than the European Central Banl but guess whose judgment markets trust?

Ex-minister of economy German Gref, currently at the helm of Russia's largest bank Sberbank, could not have put it more bluntly, making painful analogies between the demise of the Soviet Union for neglect of the economic realities and the current situation in Russia.

It is not yet a free fall for Putin, but it is definitely the final section of the road.
Публикувано от Ilian Vassilev в 16:43 ч.