Bulgaria Analytica: US LNG or North Stream-2 – the markets will decide

Link to original in Bulgaria Analytica

Two events overshadowed the geopolitical landscape on the eve of President Trump’s visit to Poland to attend the Three Seas Initiative Summit. The TSIS is a joint Polish-Croatian project, launched in 2016, with the aim of strengthening trade, infrastructure, energy and political cooperation among countries bordering the Adriatic, the Baltic and the Black seas. Twelve countries are members: Poland, Hungary, Czech Republic, Slovakia, Romania, Bulgaria, Lithuania, Estonia, Latvia, Croatia, Slovenia and Austria.
The fact that the American President will preach the case to CEE leaders for US LNG imports comes as no surprise, yet there is a hidden context and a more complex backdrop against which both the expectations and the deliverables of the visit should be judged.
The Case for US LNG gas
Washington has long insisted that US LNG exports should give CEE countries the chance to part with total dependency on Russian gas. Some have already started profiting from the new option with the first cargo delivered to the Swinoujscie terminal in Poland in June. Croatia is speeding up work on its LNG terminal on the Krk island. Most of the CEE gas markets are interconnected, and in extreme events could use LNG gas to balance domestic supplies and emergencies through LNG terminals in Poland, Lithuania, Greece and Turkey as well. 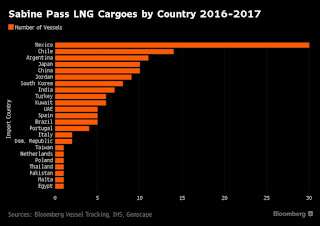